An amazing day that celebrated not only cricket but also the spirit of our local community. On the back of England’s World Cup win, the cricket club threw open its doors to village with a packed day of on and off-field entertainment including an amazing BBQ (thanks to Master-Chef Mark Taylor showing off his culinary prowess), the bar and kitchen (Landlady for the day, Diane Welby), a raffle and the silent auction. We would like to thank our club sponsors Down Hall and Vulcan Cricket for the generous prizes they donated to both.

We had an ambitious time table of events starting with the juniors match – a local derby, The Heath v Hatfield Broad Oak, which didn’t disappoint!

Not off to the best start – due to the start of the summer holidays there was a mad scramble, lead by Peter Rees on his mobile, to get a full junior team! But the power of the community social media came to the rescue; 4 new juniors who “fancied-a-go” appeared and completed our line up. With good skills on show, The Heath batting first, set a challenging total for the visitors and with some tight bowling, the match was in the balance. But excellent batting from visitors towards the end, saw Broad Oak coming out on top. There were notable performances by Padraig Rees, Joe Ingle, Joseph O’Rouke and Louis with runs, wickets and catches – further signs the future of our fine club is in safe hands! A special thanks go to Mark Strutt for organising a team at short notice and Richard for his help on the day.

As the pavilion clock ticked over to noon, there were of stern faces fixed on the club’s head coach. After an initial briefing, and for the first time in over 150 years, we had an official HHCC Ladies cricket match! I have to admit, there were a few reluctant players who had needed some persuasion but within minutes of the first ball being bowled the same faces were replaced with competitive ‘games faces’! 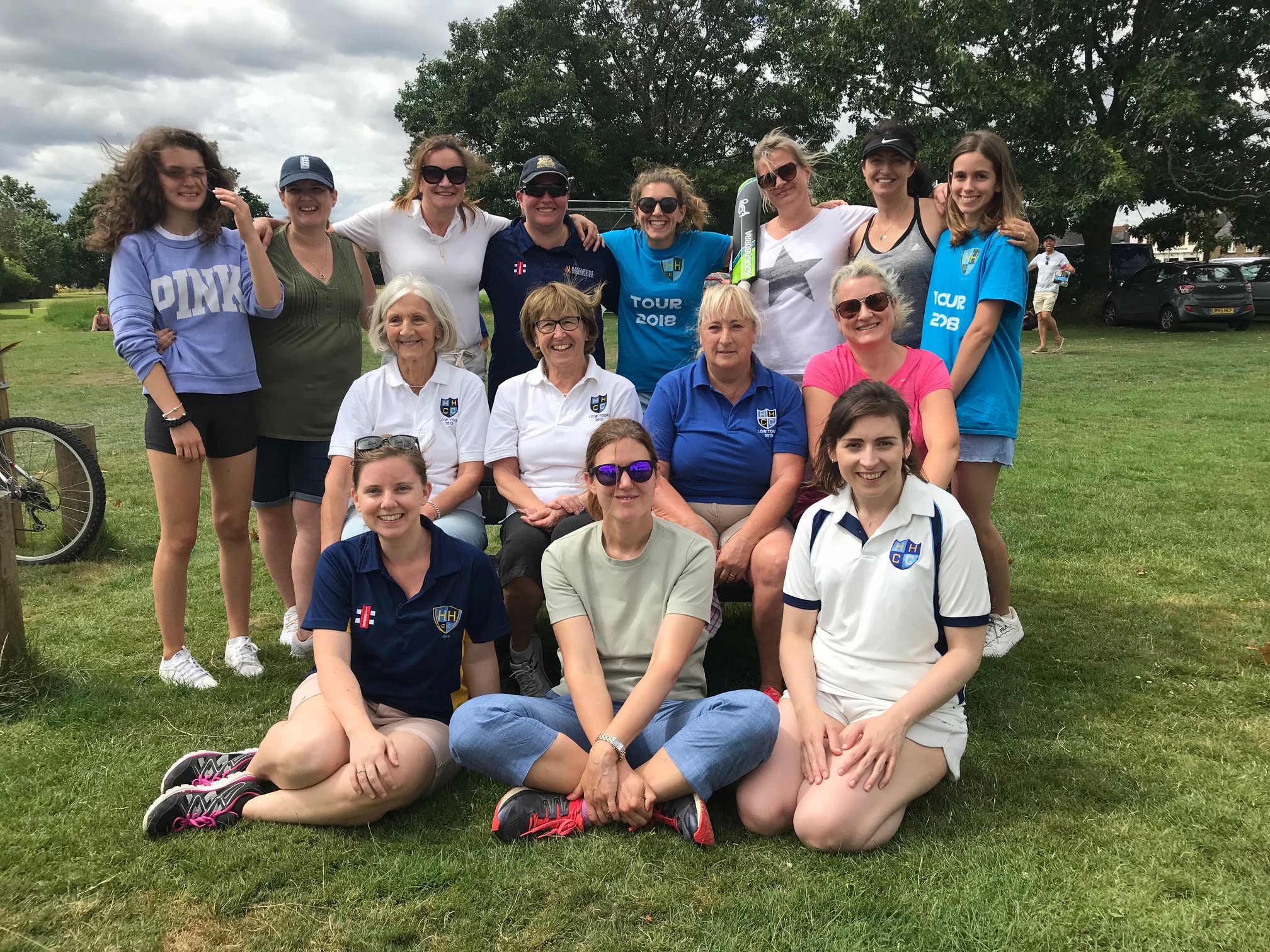 This was the first step along a path for everyone in the community to be able to access cricket and the club – if we can capture the positive energy generated by this match, there’s a real possibility that the club will be able to offer regular cricket for our ladies. The match itself went down to the last over and in fact the last ball. Dramatically, Teresa Mascall turned and sprinted for a second run to tie the match. Unfortunately, her hamstring had other ideas and fell short of her ground. But with great match awareness and in a single movement, Teresa flung her bat to complete the run. The prematch briefing and basic rules of the game hadn’t covered this particular eventuality, so the umpires declared the match as a tie. A complimentary glass of Prosecco was a great way to mark this inaugural match and the post-match feedback has hopefully put Ladies Cricket firmly front and centre at our club, alongside the juniors and men’s cricket moving forward. 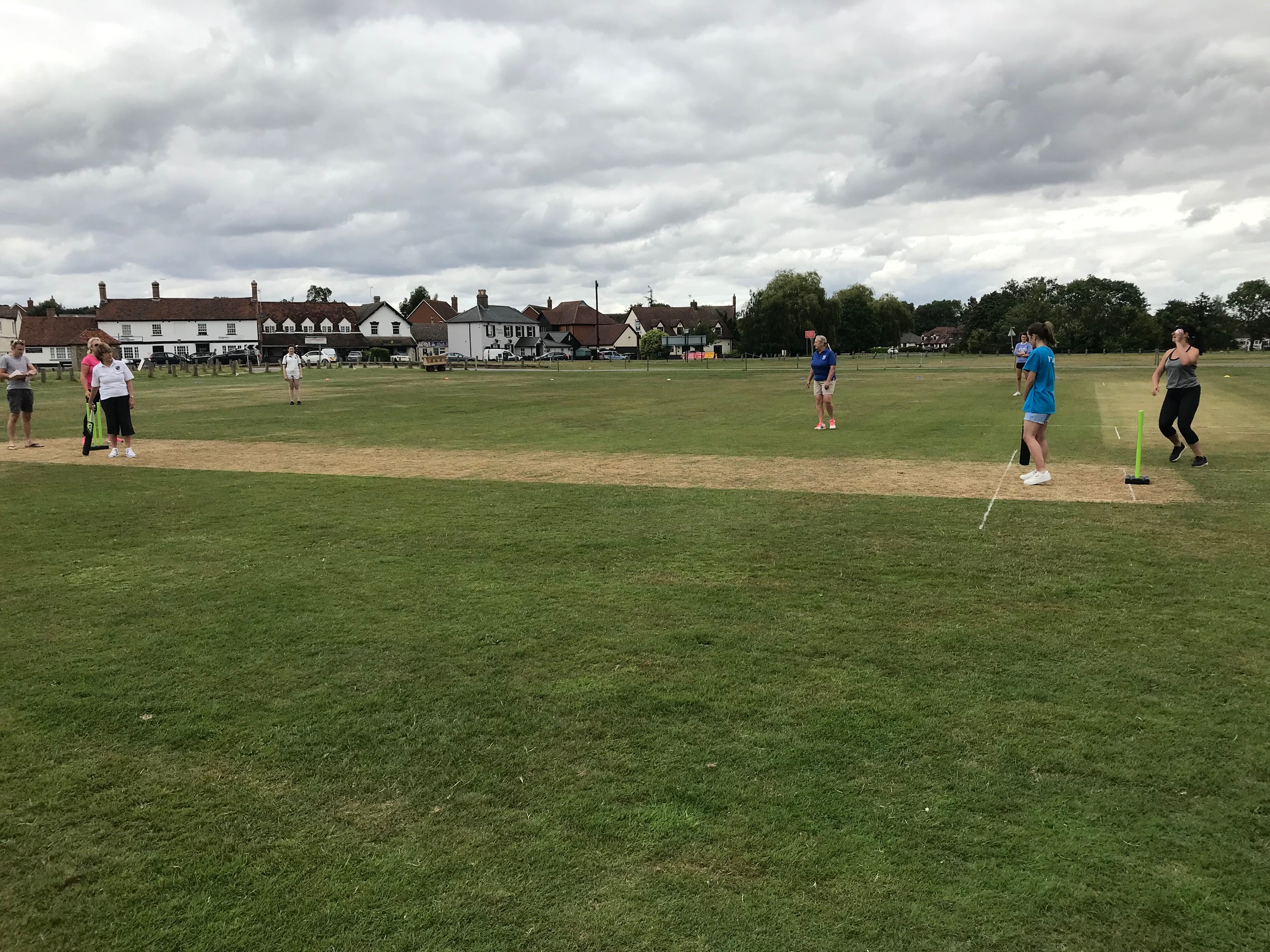 Next was the annual Chairman’s IX v Captain’s XI fixture. With teams selected from the assembled ‘talent’, players had the chance to settle old scores and win the bragging rights for a whole year. In the glorious warm summer sun, the match kicked off with Welby senior opening the bowling against his son Alex who showed no respect! “Take that!” It rather set the tone for the Chairman’s XI match and an imposing total was soon posted.

Half time refreshments miraculously appeared – it was a monumental effort by the team in the pavilion and much appreciated by all.

Weighed down somewhat after the refreshments, the second innings was soon in trouble, with self-inflicted run-outs and poor shot selection. The match became a rather one-sided affair with the Captain’s XI winning (Booo!). But that didn’t matter. For the everyone playing, the long walk off the pitch was greeted by loud applause from the gathered supporters who were in good voice – the all-day bar had worked its magic! 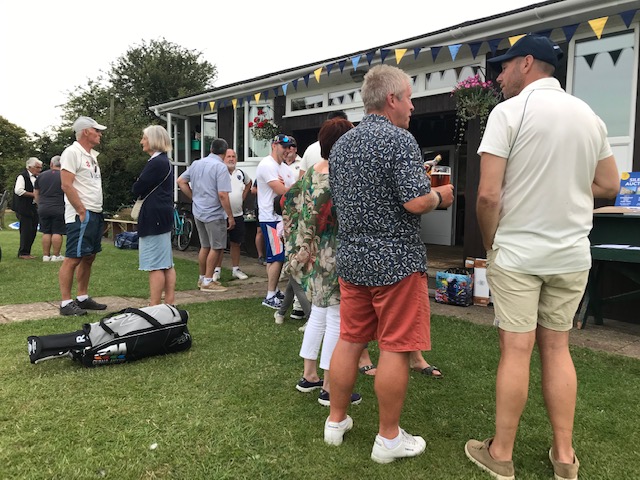 This was the final official event for our long-serving Chairman, Michael (Chairzy) Briscoe 1999-2019. With an emotional speech and a moment to reflect, Mick handed the baton over to our new chairman, Tim Mascal. We all thank Mick for his long service to the club and wish the Briscoes every happiness in their retirement in Norfolk. We now know where we’re touring (and staying) next year!

As the sunset on the ground, supporters and players alike had time to reflect on a hugely successful day on The Heath.

Special thanks go to Tim, Tom and Lee for setting up the off-field entertainment and providing the BBQ, Peter for preparing the pitches, Chokers for the music/PA system, Mark Graves sorting out the food and beer, and our star signing this season, Dom, for providing the light refreshments free of charge!

Also, thank you to the COOP and Dorringtons and everyone who contributed to an extremely successful.